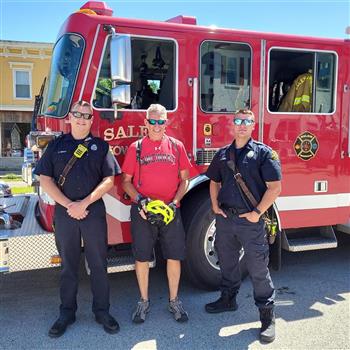 My bike ride for the Michael J. Fox Tour de Fox was completed during the week of August 21st.  I was accompanied on the ride by Thom DeMuth, a good friend from church.  We completed the ride in 6 sections:
Along the way, we saw a lot of farmlands covered with corn and soybeans.  And on one farm, we saw a field covered with sun flowers as far as the eye could see.

We also ran into many beautiful little towns like Westerville, Mt. Vernon, Killbuck, Peninsula, and Millersburg, and encountered beautiful landmarks such as the Bridge of Dreams, a 370-foot covered bridge spanning the Mohican River and the Erie to Ohio Tow Path where we followed the same path that mules walked to tow canal boats loaded with goods and passengers from Lake Erie to the Ohio River.

Along the way, we also met a lot of friendly people.  At one stop in northern Ohio, we ran into a pair of 80+ year old lady bike riders who were following the same trail as we were.  However, instead of staying in hotels, they camped out and cooked their own dinner every night.

Over the 5 ½ day trip, I also had the time to think about several of my friends who are currently fighting Parkinson’s.  The struggles we encountered on this bike ride with closed roads and detours, flat tires and out of aligned back wheels, with unexpected rainstorms, and sore backs and arms, all gave me a little insight into what my friends have to deal on an everyday basis.

However, the beautiful towns and landmarks we encountered along with the friendly, helpful people scattered all over Ohio reminded me that there is still time to get out and enjoy life with the help of organizations such as Michael J. Fox. Their goal is to not only to find a cure for Parkinson’s, but to also speed up the work of creating better treatments to slow down the progression of the disease so that people with Parkinson’s have more time to get out and enjoy this beautiful land we live in.

So, I would like to end this note by thanking each of you who contributed to my Tour de Fox campaign this year.  Through your help, we were able to exceed my team goal of $1,500 by raising $2.005.

And as of August 28th, over $561,000 has been raised by this event for Parkinson’s research.  100% of these proceeds go directly to The Michael J. Fox Foundation’s high-impact research programs.

So, thanks again for your help in supporting this year’s Tour de Fox bike ride.  It is very much appreciated!  (And enjoy a few pictures from the trip attached).