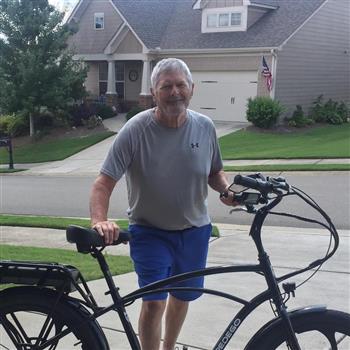 Welcome to My Page

Thank you for visiting my page! This year, I am participating in the Michael J. Fox Foundation's (MJFF) Tour de Fox Cycling Series for Parkinson's Research.

MJFF is dedicated to finding a cure for Parkinson's disease through an aggressively funded research agenda and to ensuring the development of improved therapies for those living with Parkinson's today. I happen to be one of those people, having been diagnosed with Parkinson’s 15 years ago.

I have tried several times to write this story’s conclusion, but I always seem to get caught up in the details of trying to make it “current”, and lose sight of the big picture. My former pastor and good friend Tom Davis would have described this phenomenon as “majoring in the minors”. I felt compelled to ensure that the part of the story that I had already written was up-to-date and grammatically correct, and just couldn’t force myself to write the next chapter until I figured out how to tie it in with what I had already written. I finally decided to write the next chapter totally independent of my previous writing, and to let you go back and read it for background if you’re so inclined.

First of all, if you read the first part of the story and have been looking for an update, I owe you an apology and a huge THANK YOU!!! I can tell you without hesitation that prayer works! The medical profession tells us that there is no known cure for Parkinson’s Disease, and that no one has ever beaten this dreaded disease. I want desperately to claim victory, so I’m going to go ahead and do that right now! Even if I stumble or fall, that won’t mean it has regained its claim on me, any more than it would for anyone else who might fall. When I look back over the past few years and think about where I’ve been and how far I’ve come, I can only marvel at the progress I’ve made since my DBS surgery. The description of the DBS surgery in the paragraphs below, believe it or not, is pretty much right on target. They actually drilled holes in my head and stuck metal probes through them deep into my brain, and then had the unmitigated gall to wake me up and ask me how I felt! They had me do a few things to be sure they had the probe in the right place, and when they were satisfied that they did, they put me back to sleep, drilled another hole and inserted another probe in the other side of my brain, and woke me up again. This phase of the surgery took over 9 hours. Phase 2 of the surgery came a week later, where they implanted two batteries into my chest and connected them to the probes. We then had to wait a month before they actually turned the batteries on to be sure there was no swelling or infection.

I expected to know immediately if the surgery had been successful, but it wasn’t that simple. I went through months of experimentation with my meds, and was still stumbling and falling on the golf course with virtually every shot, the bowling lanes with every ball, and even on the billiard table. I finally became so frustrated that I quit all of my meds “cold turkey”. In retrospect, I don’t recommend this course of action, but desperation had gotten the best of me…and miraculously, it worked. I immediately stopped falling, and was able to regain my life. I still get way too frustrated when I hit a bad shot, but as I said earlier, when I look on where I was just a few short months ago, I can’t help but marvel. I thank God for the miracle of this surgery, and I thank all of the brilliant people who developed this technology which worked so marvelously for me. I think Parkinson’s attacks different people in different ways, and I am thankful that the Michael J. Fox Foundation continues to search for the ultimate cure. In the meantime, I’m claiming victory in my personal battle. Please join me in my victory celebration by sponsoring Team Boss in this week’s Tour de Fox.

I was first diagnosed with Parkinson’s Disease in 2005. My neurologist was able to keep my symptoms in check for about 12 years through the use of increasing dosages of prescription meds, but from the very beginning she cautioned me that they would begin losing their effectiveness after about 10 years. During those 12 years, very few people knew that I had PD. I rode a bike, bowled, golfed, and even played tennis, but alas, when the meds did begin losing their effectiveness, it seemed like it happened almost overnight. I began stumbling and falling on the tennis court to the point that I had to give it up. Golf was next thing to go, followed by bowling, and then billiards. I fell so many times that I became something of a folk legend, and was tagged by one of my buddies as “Crash”. Over the ensuing two years, my Parkinson’s progressed (or, depending on your perspective, I suppose, my health declined) rapidly. I went though a progression of physical aids, from cane to elbow crutches to wheel chair. My neurologist suggested that I seriously consider something that she had suggested several years earlier...Deep Brain Stimulation. I’m sure I must have looked at her like she was crazy then, but now I was desperate. She arranged for me to meet with the pioneer and guru of DBS surgery, Dr. Mahlon DeLong, and he became my advocate, finally convincing his colleagues at Emory Hospital that I would be a good candidate for DBS. For this, I will be forever grateful.

I am living proof that your gift will make a real difference: 100 percent of Tour de Fox Atlanta ride proceeds will go directly to The Michael J. Fox Foundation’s high-impact research programs.

Thank you for your support! - Jack

3. RTRegina Tilley
Jack can write wonderfully. Instead of this getting you down you have became God's solider through it. Good luck.
4. MWMary Broman Wyton
This is an inspiring and hopeful story, Jack. Thank you for sharing it. And best of luck and good health to you.

5. GRGaylen & Jo Ann Roberts
We admire your strong determination to fight this disease. We know you will do well with this ride. Cheering for you!

8. EKElsa Kiser
Jack you are an inspiration to all!!

9. MSMichael Shaver
Hope that this helps in a cure for this dreaded disease.

12. CGCarol Groves
A tribute to one strong awesome man!!

13. DBDebby Bell
You are such an inspiration!

14. DLDebbie Lowe
Go Jack - You are an inspiration.

15. PSPatsy Spencer
Thank you Jack for sharing your journey!

16. MHMike Hopkins
All the best to you Jack! Thanks for all you do!

17. SJSteve Janes
You are a true inspiration Jack.

19. BDBruce Digby
Jack...what a long journey you have had. You are doing incredibly well! Thanks for sharing this donation site with us. Go Team Boss!

20. LSLynn Francis Sharp
Shirley & I hope our donation is a small step to help with the fight to find a cure for Parkinson's. We wish we could be there with you at Chickamauga Battlefield.....stay safe and wear your HELMETS.

22. FaFrank And Pat AReagan
Hoping this will help Jack and Jesse

31. DMDebbie Michel
Jack, you have been an amazing role model for all of us who might face challenges!